Our Experience in the “Big Red Glow”: 2019-20 Fires in Sarsfield, East Gippsland 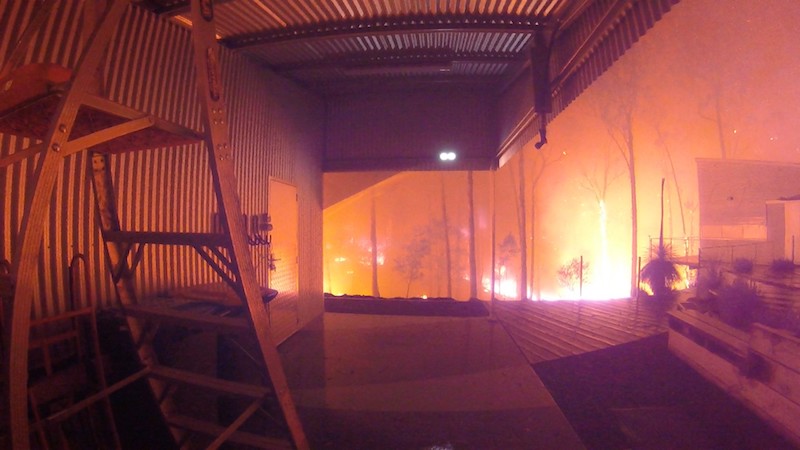 When people talk about their fire experience many comment on the “Big Red Glow” that is synonymous with what people can see, especially at night or at times when fire activity creates premature darkness, marking the proximity of fire for people.

This is the story of our experience of actually being in that Big Red Glow at Sarsfield on Monday 30 and into Tuesday 31 December 2019.

My husband Anthony and I thought it was worth telling our story – it is a positive one – and something that may be of interest to others.  We fully appreciate that the experience we had is not something that would be appropriate or even possible for everyone. It does show what good planning can mean for effectively defending your property.  We learned quite a few things that we thought were worth recording as well.

Beyond the actual fire experience, we also wanted to observe the impact to our bush and to take a real interest in the way that it recovers, and how we reconnect with it as a key reason for living in such an amazing natural environment.

We also recognise the significant impacts that people across our community are dealing with too.  The devastation and loss is so substantial, and we will be keen to understand how we can contribute to the safe and sustainable recovery of individuals and places in East Gippsland.

The content that follows may be confronting or distressing as it shows footage of actual fire activity up close.  Please exercise judgement about reading further if you think you might find this distressing.

Images in this blog can be shared freely, however, attribution to Kate Nelson Consulting with a link to www.katenelson.com.au must be included when sharing.

What drives our approach?

We purchased our 5-hectare property in Sarsfield not long after having experienced the 2003 Campaign Fires in the North-East and East Gippsland from our place in Omeo.  We both worked for East Gippsland Shire Council at that time and had roles during those fires and afterwards in supporting the immediate response and longer-term recovery.

We also spent a lot of time out in the environment around Omeo after the fires exploring areas that were significantly impacted, gaining insight into the impacts to places and the environment as a result of some severe fire activity.  We spoke with many people who experienced those fires firsthand too and grew to understand that fire conditions were changing and so was the experience of defending your property.

We are also Planners and so we had the benefit of understanding the direction that was being taken in respect to building requirements and site management.  At the time we built there was very little guidance about building materials and the design of protective structures and systems for residential buildings. There was a lot of working out required, something that has definitely evolved since then.  Our property is all native bush and so we knew that we needed to be serious about how we built and how to create a property that is defendable.

Our house is not large and the design of all our buildings simple, clean and they are all located on a small part of the property.  We don’t have a garden to speak of and have kept the area immediately around the house free of vegetation.

We are both in our mid-50’s and we are pretty fit and healthy, and we think that’s an important contributor to being able to be self-sufficient.

Some people in our street decided that a meeting would be a good idea. It was a very smart idea!  Using the intelligence of a resident who is a member of the local CFA Brigade, we met on the afternoon of Friday 27 December and talked through what was understood about the potential weather and impacts.

We all confirmed our intentions and exchanged contacts.  This was the start of a really effective communication network that was used to let everyone know who was where and when during and after the fire.

We committed to staying and defending, as did three other landowners.  In the end, only two households were here for the whole experience.

We had undertaken our usual fire season preparation in the lead up to this event. We would have liked to do more over winter to reduce some of the leaf litter and debris, however a suitable time and set of conditions never emerged.

We did work in a concentrated way after Christmas to really do some preparation work around the place and spent the best part of the morning on 30 December making the final preparations to defend our assets, including: West side of our house and linking decks.  Shutters in place and getting ready. 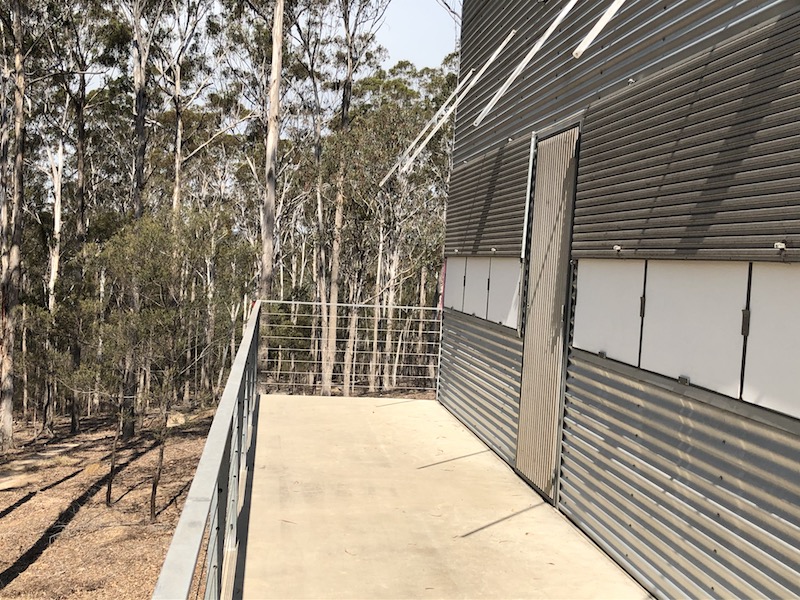 North side of the house and deck, window and door shutters in place. 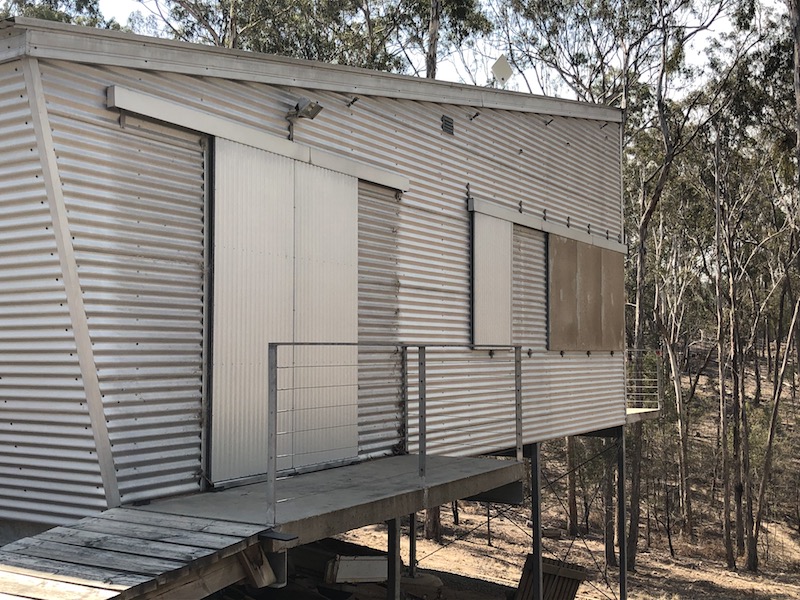 East side of the house, window and door shutters in place. 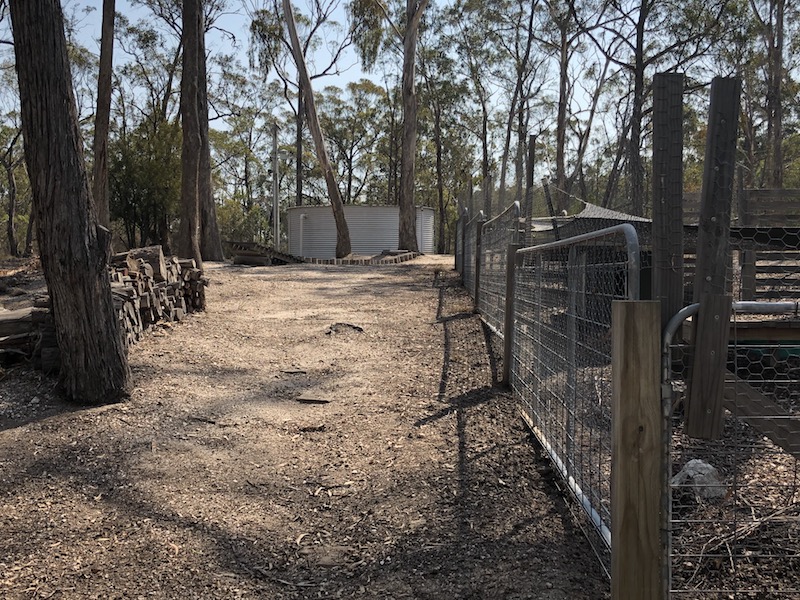 The impact of a powerful leaf blower removing leaf litter around the site. 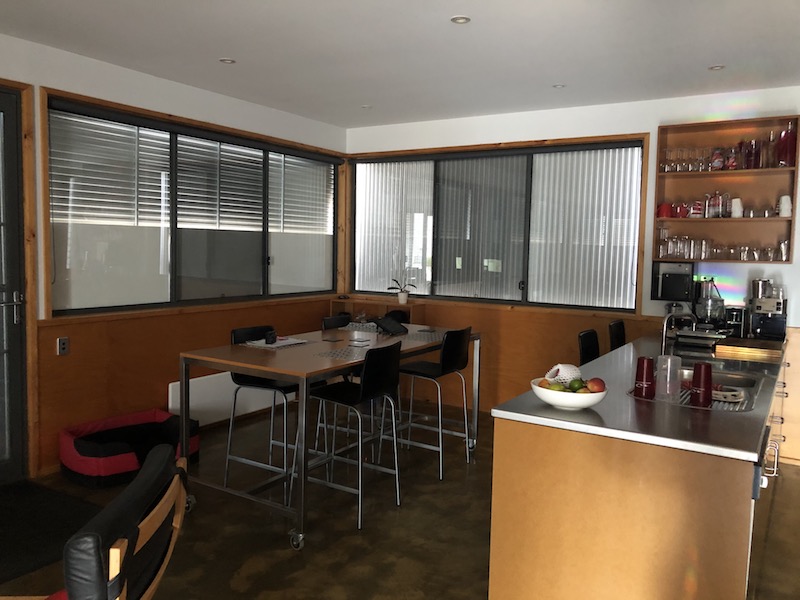 Inside with the shutters in place.

Then it was a case of watching & waiting to see what would happen.

Initially we thought that all the anticipation was for nothing, as it appeared to be relatively quiet out to our north, the direction of the Barmouth Spur Fire.

At around 2.30pm Anthony decided to drive to a high point on the Deptford Road to get a better view of what might be happening, and it soon became evident that the pyro cumulous column being generated meant that the fire was very active.

We spent a long time that afternoon watching the column grow and “lean” right over us and shift gradually to the south west in the prevailing wind.  Once again, we thought it might miss us. 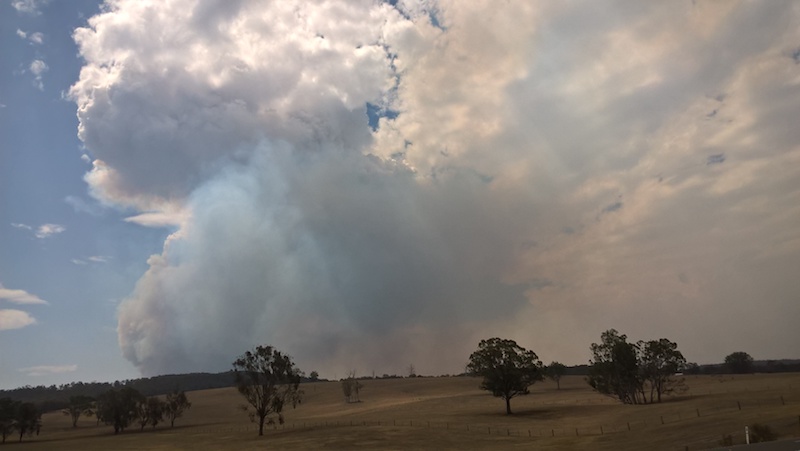 View from the Great Alpine Road west of Sarsfield and looking to the north. 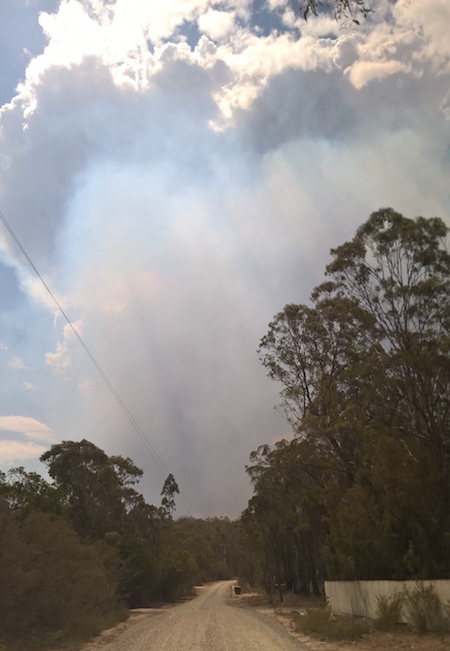 View of the fire looking north along our road. 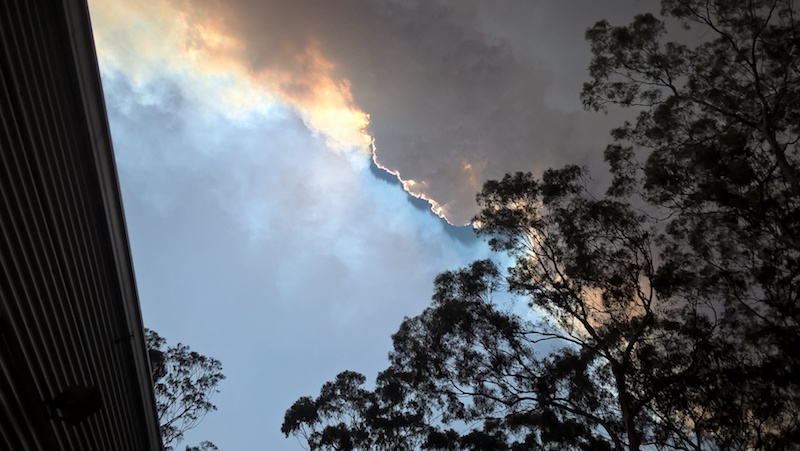 The column “leaning’ over us.

The sad state of affairs in East Gippsland at 6.30pm on Monday 30 December 2019 (at least that was what we thought at the time – it only grew from here) 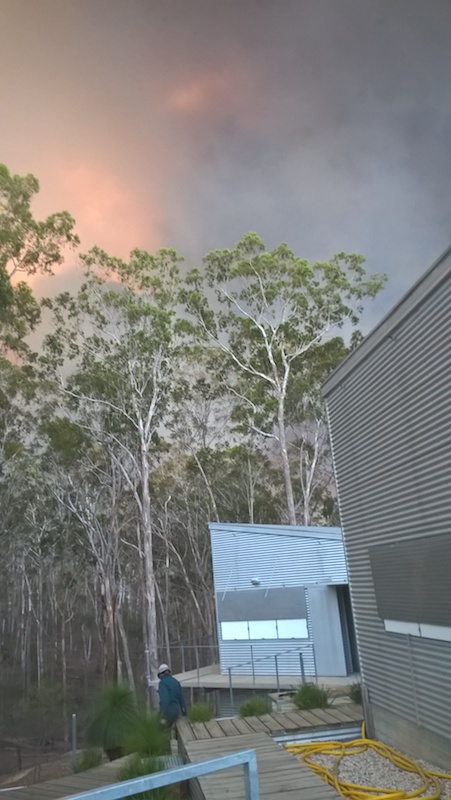 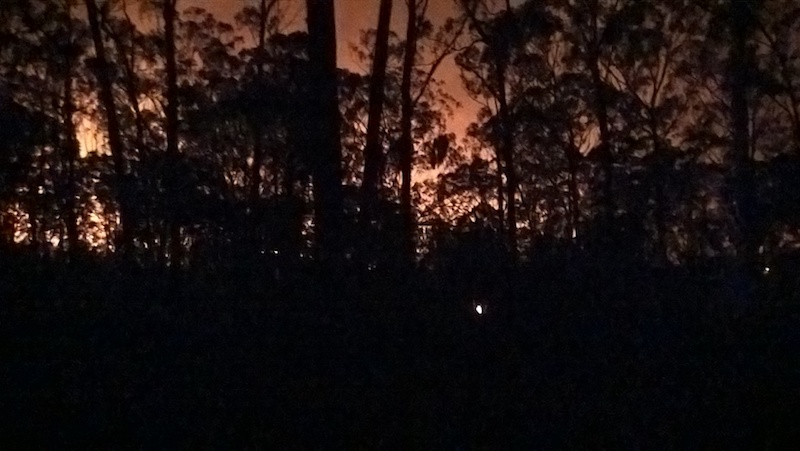 As it grew darker, we were actively watching the fire on the ridges of Old Man Hill directly to our north.

The noise from the fire was a loud roar and we could see the flames being generated as it raced up the back of the slopes to the ridgelines.  At times it looked like it was slowing down, but it then it would become ferocious again.

All the time we were watching, we could see that the fire was incredibly active to our east under the north westerly wind – we weren’t sure where, but we knew it was bad.  Now we understand why when we drive through Sarsfield.

In the lead up to the fire, I had this text exchange with friends at Eagle Point – they were looking at the Big Red Glow and so were we – just up close! 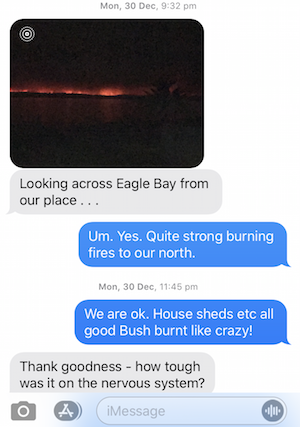 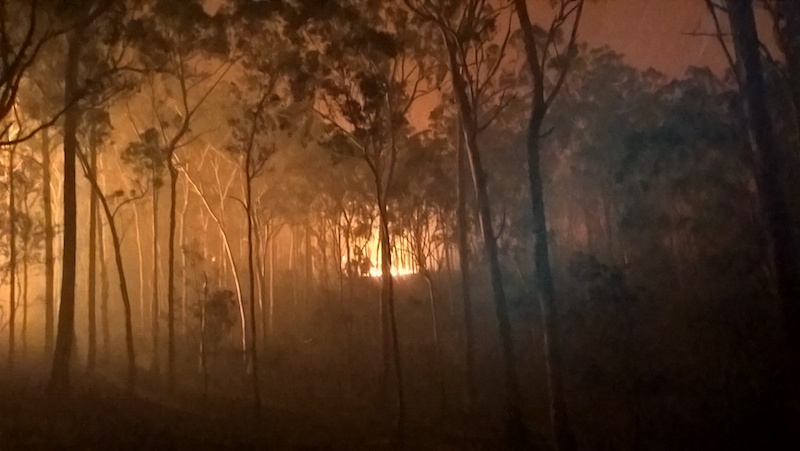 Looking to the north west from our deck. 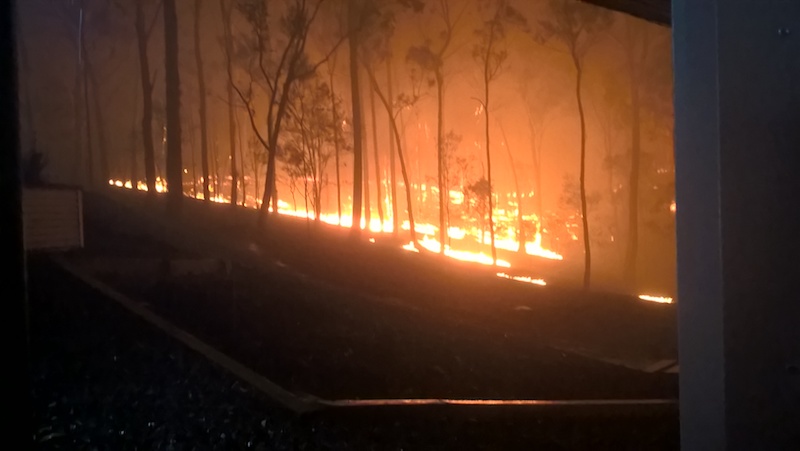 Looking to the north west from under the house

So, what actually happened during the fire?

Anthony used his GoPro to capture footage during this event.  The videos below provide context for the site and the set up we have.

It is amazing, and potentially quite confronting, footage of the event.

The first two videos provide an explanation of our site and set up and will help make sense of the videos taken during the event.

This video is quite long but shows how the fire entered our property and how it grew.

The next three videos show what it was like during the peak of the fire.

Finally, a bit of a look at our place after the fire.

What do you feel in the Big Red Glow?

Hard to describe really!  The most tension was prior to the fire entering our property.  Wondering in anticipation of what was going to happen.  Once it started though we switched into action.  It was a case of focussing on your role and making it happen. This is what we planned for.

Reality is I had a support role, checking the inside of the house, keeping our beautiful dog calm and cool in the smoke and heat, and wondering how long the ember shower could actually go on and keeping an eye on Anthony!

Anthony was out and about in the fire, exercising incredible judgment about what was required and racing around making sure it was all going to plan, even chainsawing down a tree near the dog yard that was going to be a problem in the middle of it all.

What do you feel afterward?

Some sort of relief. However, fire experts advise it still isn’t over. Each severe weather day finds the community in a state of heightened anxiety, enacting their fire plan and hoping the warnings aren’t as bad as predicted. 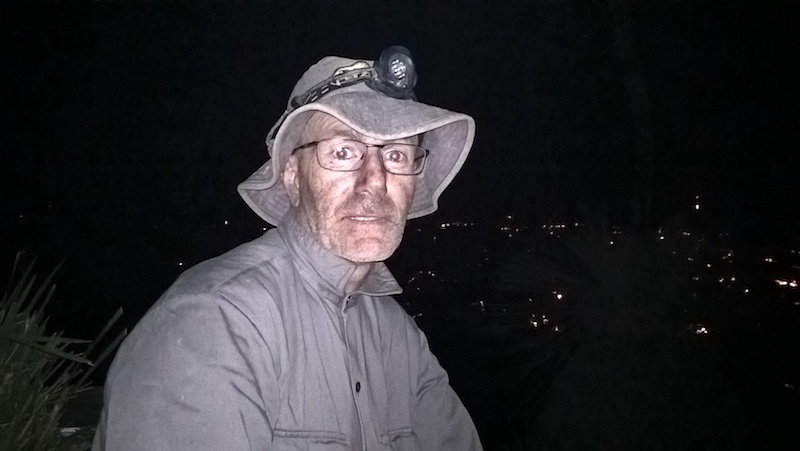 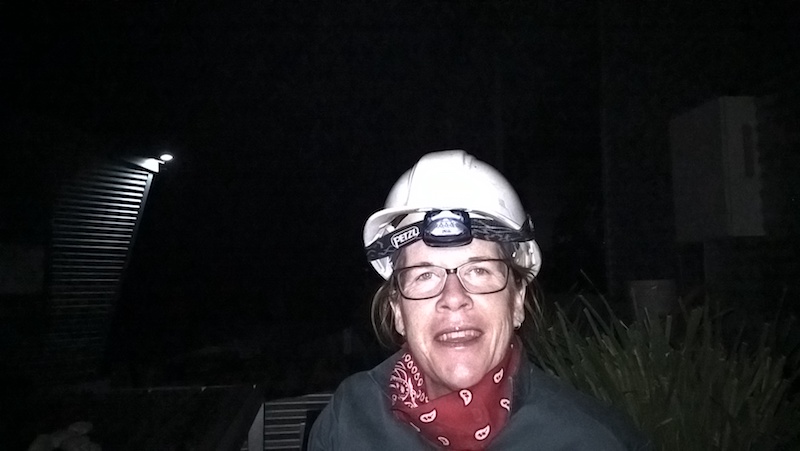 This is what we looked like afterwards though (taken at 1.00am), maybe a bit telling!

Future fire blogs will focus on:

What is important about our experience?

We appreciate that not everyone has had the knowledge, resources and opportunities that we have had to prepare our property for this event and that every person’s circumstances will be different.  But we do think this is important because the content that we have captured gives a real impression of what it is like to experience fire and what might be required to defend your place with confidence.